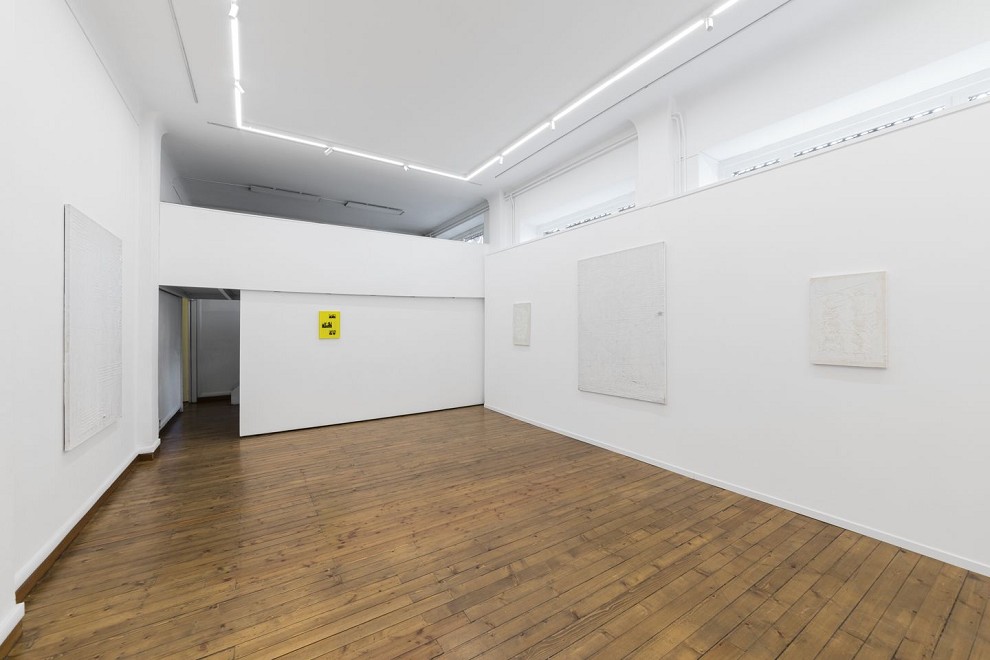 Arseny Zhilyaev - An Experiment is Not About Creating Novelty

An Experiment is Not About Creating Noveltyis Arseny Zhilyaev's second solo exhibition at Canepaneri Gallery in Milan. The exhibition project, commissioned by the gallery, continues the series of imaginary exhibitions on the future of art that Zhilyaev has undertaken in the last decade, weaving complex and ambiguous trans-historical and para-fictitious narratives in which the exhibition becomes not only an object of reflection but also an artistic medium.

The title of the exhibition coincides with the beginning of a series of poetic compositions machine embroidered on canvas and then covered with brush strokes of white paint. The verses woven were created through an algorithmic writing neural network. The authorship of the canvases is delegated by Zhilyaev to the artificial artist Robert Pasternak, a fictitious character and a futuristic example of Artificial Intelligence designed by a Russian programmer who emigrated to California. After a successful artistic career in the United States, Pasternak spent his “eternal” life supporting the victims of technological progress. There are some traces of his active communication with the intellectual context of the second part of the 20th century. For instance, a photographic composition in the exhibition portrays him close to Dmitry Prigov (1940-2007), a prominent figure in the circle of artists of Moscow Conceptualism, who worked on criticism of the ideological and linguistic preconditioning of artistic expression and created projects using what can be described as an algorithmic or machine approach to poetry and art in general. Pasternak is also a member of the Writers of Text Messages Union (WOTMU)of the Bay Area, a group committed to defending creative potential from the cognitive cages imposed by global elites who govern the world of digital intellectual and linguistic production. The union was responsible for a general strike in 2063 and claims the "total automation of writing", echoing the Accelerationist Manifesto i.e. the re-actualization of the idea of "automatic writing", a concept introduced in the 1930s by the Surrealist movement and André Breton with the scope of emancipating human creativity from the limits of social pressure.

In the two series of paintings exhibited, the artist resorts to the modernist trope of monochrome. Different levels of visual poetry, texture and painting come together on a totally white surface, the achromatic color that contains all the colors and symbolizes light, one of the recurring themes in Zhilyaev’s work. Hinting at post-war abstract European painting, from Pinot Gallizio's Industrial Paintingto Piero Manzoni's Achromes, the series of achromatic canvases incorporates the dilemma between modernism and its opposite, and a scientific/technological modernity and a link with the artisanal, primitive, somatic and pre-linguistic experience.

Zhilyaev continues his research on the relationship between creative labor, technology and social criticism inAn Experiment is Not About Creating Noveltythrough the use of futuristic invented characters and the subversion of art historical canons.

Will the support of automation of artistic production offer the chance of a radical change of the actual situation of creative exploitation in contemporary art sooner or later? The artist suggests the possibility of a creative repudiation of participation in artistic production as a privilege in the condition of late capitalism that adopted the slogan “everyone is an artist” as its obligatory credo. This dystopian scenario, where automation frees the artist from the requirement to produce exclusively what is new and non-determined, doesn’t presuppose any political transformation through art for Zhilyaev but interrogates our limits in imagining the relationship between “natural” and “artificial”, artificial intelligence and its embodiment in the human being, human progress and the writing of history. If, seen in retrospect, avantgarde cultural and artistic movements set the stage for the emergence of post-Fordist society, rather than facilitating increased equality and autonomy, what will the consequences of this kind of future art be?